We left for the small village of Thanamalwila in the dimming sunlight at roughly 8.00 p.m. on 20th January together with the brothers of Leo Club of Mahanama College. By and by, the city faded away and the greenery surrounding the roads grew thicker. It was early in the morning when we reached our destination at 7.30 a.m. Our team from Rotaract Mora and Leo Club of Mahanama College made our way towards Hambegamuwa Janapada Kanishta Vidyalaya where the principal and the eager youngsters awaited our arrival.

Upon our arrival, we were all given a delicious breakfast of rice and curry prepared by the parents of the students of Hambegamuwa Janapada Vidyalaya. The crowd assembled at the school’s main hall where the Principal addressed the gathering. He declared his sincere gratitude for organizing such an event and stated that it was very rarely that students of their school had gotten the opportunity to take part in a leadership training programme. Next, one of our Rotaractors addressed the crowd and gave them an insight into the project “Grama Proabodaya”. Following the introduction, the Head Prefect of Mahanama College conducted a motivational speech and interactive session with the students. There he elaborated about his academic life and the manoeuvres which he had adopted in order to face the obstacles which he had faced in his studies and as a leader.

Following the conclusion of the speeches, the small crowd filed out of the hall and headed towards the school playground where the games were to take place. The kids were divided into four groups to help them practice working as a team and strive towards the victory of their team. While they were in groups, they were given their first task: to make a flag out of organic material found in their surrounding when we only provided them with plain cloth. Several other games followed and the kids enthusiastically engaged themselves and unknowingly, they were developing the hidden leader within them. The next game was for each group to collect water from a basin using their hands and to fill one water bottle each. The team which filled the bottle first would win the game and the kids hurried one after the other to get as much water as they could through the small opening in those bottles.

The game which they enjoyed the most was “Thaappa Kadeema” or “Breaking walls”. The kids of one team were told to make a human barricade by standing side-by-side while tightly holding on to each other while the other teams had to break these walls and penetrate to the other side. It was quite a treat to watch them hold on to their team members, as hard as they could, just to get the taste of that victory.

The ending of the games brought the next heavenly meal which too was prepared by the parents of the students. We sat on the dusty ground amongst those budding youngsters enjoying the meal while listening to their sweet endless chatter. We listened to the stories of their school days, their homes, friends, pets, ambitions, even sad tales of lost parents and lack of facilities.

The next activity for the day was to build the bonfire for the night. We gathered the firewood which the school had brought and started building the upright stacks of wood with the help of the kids who were very eager to see it up in flames. As dusk drew nearer, we lit the fire and a massive crowd of parents, teachers, students, principals of some nearby schools of the Hambegamuwa area had gathered along with the kids to admire the dancing flames. As the dried wood burnt away, the kids sang and danced around the fire. They had prepared several dramas for the occasion and entertained us with them. Another game where the kids were given drama topics instantly and told to act was conducted there. It was amazing to see how creative they were to just craft amazing dramas within just a matter of minutes. Dinner was provided for all who arrived and was sponsored by Rotaract Club of University of Moratuwa as a special treat for everyone.

Late in the night, the fire went out and it was time for the kids to return to their homes and our gang headed to lay down and drift to a peaceful sleep amongst the quiet night sounds of nature.

Sunday morning started off with some physical training exercises which were conducted by two of the Mahanamians who are actively engaged in Rugby. After doing their early morning marching, stretching and running activities, a few of us from Rotaract Mora conducted a session of breathing exercises. The breathing exercises mainly focussed on teaching the kids to develop their concentration skills. To help them calm their bodies and minds to prepare them for the endeavours they will have to face as future leaders. It was a mesmerizing sight to watch those little ones, sitting quietly on the ground while they focused on their breathing. As the refreshing session of mental and physical health came to a close, we prepared to say our goodbyes. The principal of the school delivered a “heartwarming vote of thanks” for our contribution and we too thanked the principal for the support given to us and the accommodation. We also told the kids to pass on our thanks to their parents for their massive support given to us.

However, before we left, we made sure to take as many photographs as we could with those little hearts and they enjoyed the photo shoot as much as we did. Although we may or may not see those little ones again, and although we know that, that goodbye would be the last, their little chatter, their amazing stories and remarkable potential would live in our hearts forever.

Next PostAre you ready to celebrate? - World Rotaract Week 2019 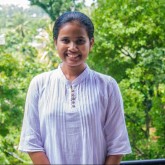 The Conquerors from Rotaract Mora

Ceylon Safari 2019 – An Expedition around the Pearl

Wanakkam – A moment of harmony

Joy of Christmas – a hope to rekindle happiness