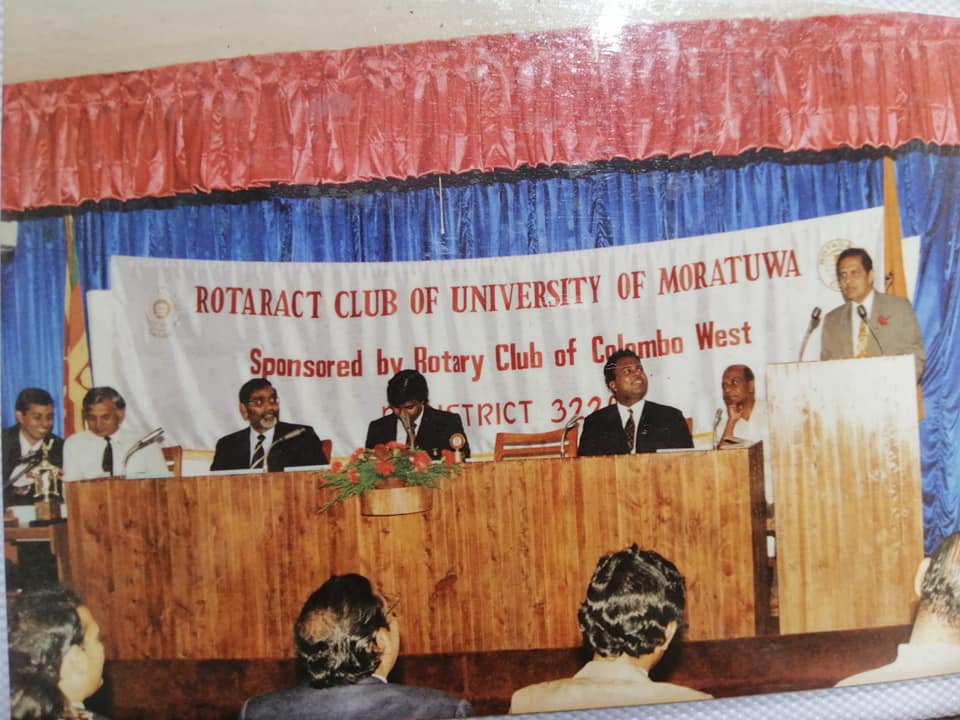 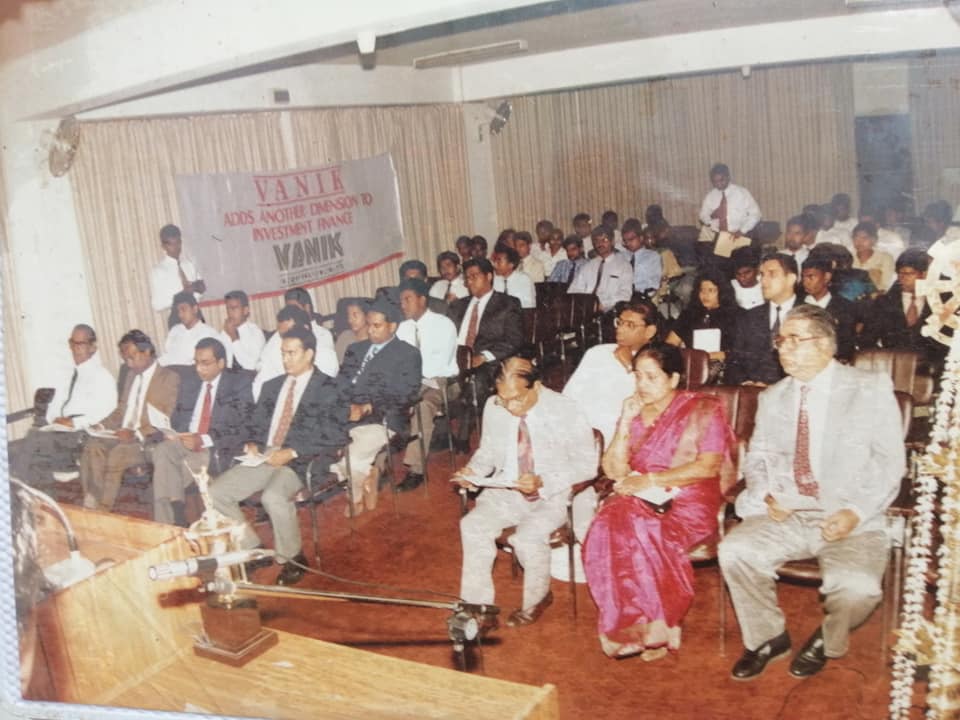 Charter members of the Rotaract club of University of Moratuwa. The club was sponsored by the Rotary club of Colombo West. Chartered during 1994-1995

• Presentations – This was the first project carried out by the club. This project was about acclimatizing the undergraduates to shoulder the responsibilities in the corporate world.

• ‘Polio Plus’ – An awareness campaign at rendezvous places and schools for interactors to promote awareness of the polio campaign.

• Commencement of the Rotaract Bookshop – Opening up of the bookshop managed by the Expographic Bookshop that lent a hand to the students to buy books at an affordable price at the University of Moratuwa.

• ‘Are You Ready?’ – The official career guidance program of the university was initiated in this year with the hopes of providing the undergraduates a helping hand to realize the scope and challenges of the corporate world.

• Workshop on stock exchange – This was basically organized intending to help the students of the university to get an idea about the economy of Sri Lanka.

• ‘Polio Plus’ – The Rotaract Club of University of Moratuwa helped the Ministry of Health, Moratuwa to organize 72 centers in the Moratuwa area.

• ‘You are not Alone’– This project included visits to areas displaced by war, distribution of clothing, books and other goods to refugees and organizing a Peace Exhibition.

• ‘Glimpse of Heaven’ – This project was organized with the objective of crusading for the betterment of children who live in Homes for Children. Five selected homes for children were given the opportunity to take part in this event and embellish the talent show with their innate talents. Money collected by selling tickets was donated to the homes.

• ‘Future Engineer’ – This Professional Development project was implemented with seminars on “The Practicing Engineer, Communicating Effectively, Continuing Professional development and Choosing a career” to the final year students of the University of Moratuwa.

• Visit to the Maharagama cancer hospital – 16 Rotaractors from the club visited the National Cancer Institute at Maharagama and donated 600 Mammography X-ray films which were urgently required and 471 Emeset Intravenous Injections which were in short supply.

• Initiation of Gavel Club of University of Moratuwa -The club became the catalyst in initializing the Gavel club in the university affiliated to the Toastmasters International.

• ‘Raise of Hope’ – This was the event organized by the club to lend a hand to those who suffered from Tsunami, the unexpected calamity that ever occurred in the Sri Lankan history.

• ‘Beyond Boundaries’ – This two-day outbound residential leadership training camp was carried out at the Kuda Oya Military Base with the participation of 35 Rotaractors.

• ‘Are You Ready?’ – This year it was expanded into a careers week with 3 sessions including Pre-session and “Into the Future”.

• ‘Be a Leader’ -This seminar was formulated with the idea of enhancing the ability of undergraduates to take over responsibilities and also to persevere along the path of success through obstacles.

• ‘Awakening Sooriyapokuna’ – This project was allied with many kaleidoscopic projects. “Going Bananas” was one of them to introduce new agricultural techniques to bring stability over their economy. Apart from these, IT workshops were also held in order to polish the facets of their knowledge in mingling with the new technology.

• Expansion of ‘Are You Ready?’- The Careers Week was expanded into a careers fair with an exhibition and for the very first time a “Dining Etiquette & Grooming workshop” was held at Hilton, Colombo.

• ‘HandZ’ – This was implemented with the intention of widening the scope of serving the community in Sri Lanka. More than providing the obsolete with the material donations they have resolved to harvest the knowledge and skills within them to uplift the prevailing status of the country.

• ‘Higher Education Studies at US’ – This workshop was conducted for over 300 students on the opportunities for higher education in United States with the support of SL2College and Fulbright Commission.

• ‘Ideas’ – This project helped the undergraduates to reinforce their commitment to thrive in their future accomplishments and also to instill a touch of an entrepreneurial attitude in them.It also aided them to speculate the strengths and weaknesses of their lives which would take them to higher targets in future. It won the District Professional Development Citation for the first time.

• ‘HandZ’- HandZ was bought into a new level with a number of education and other seminar series being carried out in Anuradhapura which won the citation for Best Community Service Project at the Rotaract District Assembly.

• ‘Gift a Smile’-This project was initiated in July 2010. The idea was to help a selected group of underprivileged children, every month with the contribution of the Rotaractors who are the birthday holders of that month. Eight successful phases have been carried out so far. Through the projects the Rotaractors have been able to bring a smile to several groups of needy children in the society.

• Building Communities & Bridging Cultures – For the first time in its history the club hosted 16 Rotaractors from Rotaract Club of Kowloon Golden Mile, Hong Kong for seven days implementing joint community service projects in Polonnaruwa and sightseeing around the country.

• ‘Hand In Hand’ – Hand in Hand project was initiated to find funds for medications for Cancer Hospital, Maharagama. A total of Rs. 300,000 was raised for the hospital through selling of Christmas cards with the artwork being done by the cancer stricken children themselves. This won the Best Community Service Project at the district Assembly.

• ‘Are You Ready? 2011 ‘– This year the careers fair of the university consisted of five days one of which was dedicated to conduct interviews for the final year students with the participation of 65 interview panels from 51 companies.

• ‘Shelter Box’ -Project Shelter Box was done in collaboration with the Shelter box Response Team to provide shelter boxes to the flood affected areas in Ampara and Batticaloa districts.

• ‘Beyond Horizons’ –Beyond Horizon was the International Service trip of 2011 organized by Rotaract Mora, where they hosted 26 members from the Rotaract Club of Chung Chi College of the Chinese University of Hong Kong for eight days. While their stay they joined hands with the Rotaract club of University of Moratuwa when they spent a day with the children at National Cancer Hospital,visited Sigiriya and Kandy, helped to colour-wash the Kalugala Vidyalaya, Dambulla and conducted English workshops in the same school.

• ‘Grama Prabodhaya’ – This project was initiated to uplift the quality of lives of the small rural village of Ranugalla, Monaragala. The project was awarded the ‘Single Club International Winner in year 2016-17 Rotaract Outstanding Project Award’ by the Rotary International. This was the first time for a Sri Lankan Rotaract Club to win this prestigious award.

• ‘Zooxanthellae’ – Zooxanthellae was initiated in collaboration with Siam City Cement (Lanka) Ltd to reconstruct coral reefs present in the South coast of Sri Lanka with the intention of enhancing the artificial growth of coral reefs in most suitable locations.

• ‘LinkR’ – An initiative taken to build an extended social media platform which connects Rotaract District 3220 and the Rotaractors all around the globe.

•Hand in Hand – ‘Hand in Hand’ marked another historical milestone in 2017/18 by raising funds worth LKR 1,812,500 through the sales of Christmas & Vesak cards, stickers, t-shirts and donations.

•Ceylon Safari – Project Ceylon Safari was a turning point in the avenue of International Service where 6 foreign Rotaractors were hosted by Rotaract Mora for a period of two weeks. They were given the opportunity to explore the natural beauty and historical value of Sri Lanka while we strengthened international relationships and cross-cultural understanding.